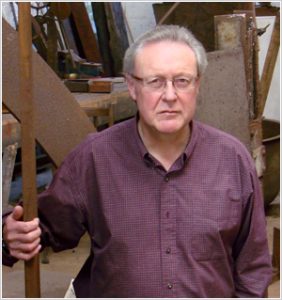 Michael Lyons was born in Bilston, in the heart of the ‘Black Country’, in 1943. He studied at Wolverhampton College of Art, Hornsey College of Art, and the University of Newcastle upon Tyne.

From 1989 to 1993 he was Head of Sculpture at the Manchester Metropolitan University, and has taught at numerous colleges in the UK, USA, Canada, and China. He has spoken on aspects of sculpture at Conferences both in England and abroad.

He was a Founding Member of the Yorkshire Sculpture Park, and was a member of the Management Committee from 1977 to 1992. He served as a Trustee of the Ironbridge Open Air Museum of Steel Sculpture from 1997 to 2006, and in 2001 was an Advisor to Tsinghua University’s Anniversary Exhibition and Global Symposium on ‘Art and Science’.

Michael Lyons has represented Britain in Biennales in China, Argentina, Mexico and Australia, and has attended many Sculpture Symposia in Europe, Asia, and Central and South America. He has eight large-scale public sculptures sited in major cities in China, and eight in Mexico as well as those in Europe and the UK.

He won the Yuzi Prize (1st Prize) at the Guilin Yuzi Paradise International Sculpture Awards in 2003 and the Premio Fondo Nacional de las Artes at the Chaco Biennale in 2006. He has been Artist-in-Residence at several venues including Grizedale Forest in 1984, Redgate Gallery, Beijing, in 2001 and 2002, and most recently at Shanghai Sculpture Park in 2009, which resulted in a monumental bronze called ‘Voice of the Mountain: Sudden Storm’, being permanently sited in 2011.Lyons was given the opportunity to teach steel sculpture at China National Institute of Fine Art in Hangzhou. Formerly Zhejiang Academy, the school is the oldest and one of the most important Academies in China. This was the first time such classes had ever been incorporated into the curriculum of a Chinese educational institution and affected not only the students but influenced the teaching strategies of other Academies.

‘Discovering’ China had a profound affect on Lyons’ life and work; he wrote at the time that his first journey to China stretched him emotionally, mentally and spiritually. It was only after contact with that vast and complex country that he began to introduce more diverse materials into his sculpture. He also began to work in clay and plaster for bronze through his involvement with the Li Gang Bronze Foundry, which moved him away from steel, which had been his primary material since the 1970s.

His response to natural phenomena and forces of nature made him receptive to ancient Chinese art and philosophy, and he enthusiastically embraced the country’s history, culture and myths as well as the dramatic changes and dynamic energy that characterize China today.

Paradoxically it was through connections in China in 2004 that Lyons made contact with Mexico, a country that had fascinated him since, as a student, he had become aware of Mexican sculpture through the work of Henry Moore, and the myths of Aztec religion by reading D.H. Lawrence’s ‘Plumed Serpent’. The Anthropological Museum in Mexico City was a revelation, and the richness and diversity of Mexican culture has proved to be a tremendous source of new ideas.

His ability to respond to ‘place’, to the ethos and history of a site, makes working to commission an important part of his output. Working with professionals from other disciplines, architects, landscape architects and engineers, is a vital part of the production of his large works. His sculptures often entail collaboration with many assistants, and in some cases navigating language and cultural barriers.

Though Lyons’ work draws on many sources of inspiration, he remains committed to abstraction. His early work was influenced by the landscape of Industrial Midlands and exhibited both mechanical and organic traits, but in recent years the organic has come to the fore. The constructive tradition of Picasso, Gonzalez and David Smith has been important to his development.

While Michael Lyons continually questions and develops his working practices utilizing new ideas and influences, his work has remained remarkably consistent in formal strength, monumentality, and reference to primitive art and that of other cultures.